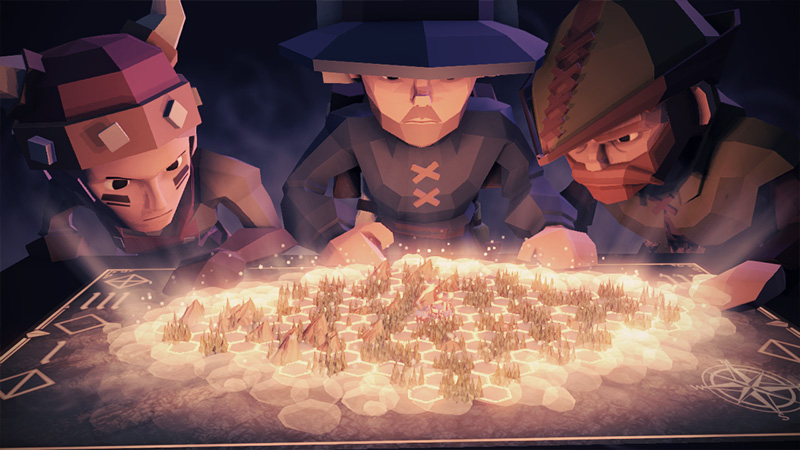 For The King has been out for awhile now on PC via Steam, but it recently ventured onto PlayStation 4, Nintendo Switch and Xbox One, including all of its previously released content expansions: Dungeon Crawl, Frozen Expanse Adventure, Gold Rush Un-Cooperative Mode, Into The Deep and others. It’s also available via Xbox Game Pass, so well worth trying out if you’re already subscribed to this. For The King bills itself as a “strategic RPG that blends tabletop and roguelike elements in a challenging adventure that spans the realms” and I have to say it really does tick those boxes and it does it well.

ROLLING FOR INITIATIVE…
As well as utilising fast-paced turn-based combat, the game features so many Dungeons & Dragons elements, such as “rolls” that can result in the perfect execution of actions, in combat and on the field, mixed percentage chances and of course, critical fails. Like your favourite table-top series, critical failures can result in your weapon completely breaking, or damage to your character as you fail to climb the steep cliff before you. You also begin to question why you thought drinking from that random fountain wouldn‘t poison you, but we all make mistakes. There are random encounters that can appear at any time on the procedural generated maps, so no two adventures will ever be the same, even if you choose to follow the same campaign arc more than once. 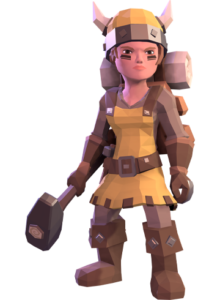 There are a few campaigns to choose from, some of which are actually different game modes, if you fancy setting out on a different adventure entirely, and they have their own environments with different hazards to deal with too. For example, if you set out on the Frozen Expanse Adventure you’re going to have to deal with the fact that your characters will take -3 frost damage on each of their turns if they’re not sheltered somewhere on the map. The weather in the game can affect your adventure in other ways too. For example, if it’s sunny you have a chance of receiving the “Nice Day” effect, giving you 2 more movement tokens. Rainy weather on the other hand reduces the amount of movement tokens you have. For players wanting to challenge themselves, there are also different difficulty settings if you want to turn up the heat for your poor little adventurer characters.

The game also features ships, once you receive or purchase a ship deed that is, and that allows for travel over the sea where you can discover different enemies, encounters, dungeons and more. Ships can take damage in encounters, so be careful, but there are places where you can get your ships repaired. Also, spend too long at sea and you might accidentally encounter the hefty boss – the Kraken.

The narrative of the campaigns is nothing special, the story line certainly isn’t going to grip you and if you’re anything like me, you don’t really care where the chaos that’s plaguing the land came from as long as it doesn’t grow so much that it interferes with your game play. (If you don’t help to reduce the gradually increasing chaos, the enemies will scale in difficulty.) The plot is what you’d expect of a Dungeons & Dragon campaign, with all the fantastical elements and creatures included too. For example, in the main campaign, the kingdom of Fahrul needs you, solve the king’s murder and remove the threat of chaos! You’ll find you have main objectives to achieve, as well as optional side quests, and each time you fulfil a main objective it leads you onto the next one, and normally the next portion of the otherwise cloud-covered map too. But then again, this isn’t a game that you pick up for the story, what keeps you engaged is the quirky and addictive game play. So the fact that the story line isn’t very meaty doesn’t detract from the game at all.

ONE DOES NOT SIMPLY WALK INTO FAHRUL
The game begins with a message that warns you not to be disheartened if you don’t succeed at first, no you’re not in for some Dark Souls-esque pain, but it’ll probably take you at least one trial 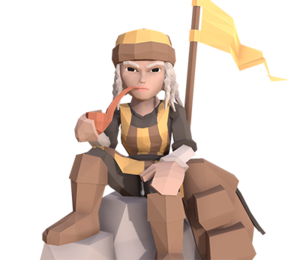 run to realise you might need to plan your adventure differently on your next attempt. You only have a set amount of lives that you can re-use to revive fallen character, there are a few ways to gain a life point back, but they’re not that frequent. If you run out of life points and your last surviving character dies, it’s adventure over. If all characters fall in battle, it’s adventure over, regardless of whether you have lives spare.

So you might want to re-think how many healing items you carry, or take your characters to a town to rest up more often rather than risk them biting the 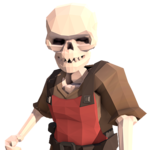 dust. If one or two of your characters fall and you’re out of lives, you can run around the map hoping to encounter a fountain of life and get a perfect roll, or find a chaos generator to destroy and choose the option to replenish a life point rather than reducing the chaos. When you have life points, one of your characters can go to another and revive it, or on the fallen character’s turn they can choose to revive at a nearby town at the cost of a few experience points.

You can see how many life points you have just underneath the right of the timeline bar at the top of the screen, and the chaos meter is below the left of the timeline bar. The timeline shows the order of events both in and out of combat, so you know whose move it is next. It also shows when the chaos is going to increase and when a scourge is going to be unleashed on the land. Scourges are bosses that appear and have a detrimental effect on the world while active. For example, they might steal some of your loot, or they might make it so you can’t tell which enemies are which on the overworld map. Fortunately, you can happen upon their haunts before they are active and take them out before they start to bother you.

CUSTOMISING THAT CHARACTER SHEET
If you’re venturing out alone, you’ll be taking control of three different characters. Of course, for co-op you can find friends to take control of the other two adventurers that make up your party. You decide each “class” by choosing a character for each player slot, and there are a few customisation options for their physical appearance if you really want to make them your own. You can get more appearance options in the lore store from the main menu (you earn lore points whilst playing).

There are a variety of characters within the game and you can unlock more as you progress through the game through a combination of meeting certain game requirements (such as freeing the character in a quest) and purchasing them from the lore store. Each character has its own strengths and weaknesses, but the way you utilise those classes is really up to you, which is a great element to the game. 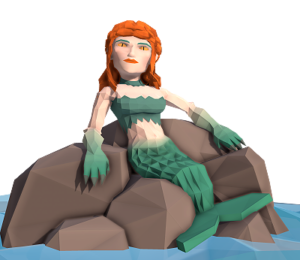 For example, weapons are the main deciding factors of what skills your characters have and you can choose whether they equip weapons that make them a damage dealer, support class or a healer. One spell book weapon will give magic spells to attack your foes, another might give spells to buff your party, whilst another might give opportunities to heal yourself and your team mates. If you want to be cautious then you can have a dedicated healer character, or if you want to wing it a bit more, have all characters equip weapons that give damage dealing abilities and just rely on consumables to replenish your health. It’s entirely up to you how you want to have your party set up and that’s what makes it all the more enjoyable.

You can pick up some pretty neat weapons too that do some serious damage, but the challenge is keeping them. I picked up a lute after a fight and it was pretty kick ass, but it only had a couple of roll slots and was breakable. Failing all roll slots results in a critical fail and breaks the item. Farewell, sweet lute. You served me well. Any items, gold and weapons you gain from battle can be given to any of your characters who participated in the fight, so you can choose who would use it best. When it comes to gold you can choose to share amongst the 3 characters, or have one character take it all.

One of the main things that caught my eye about For The King was its graphics. The visuals are reminiscent of wood carvings come to life, as if you really were playing a table-top board game

where all the pieces have been intricately carved. It’s all too easy to fall in love with the unique style that the game has to offer, especially when there are little details that make you appreciate it all the more. For instance, when you fire with a bow and arrow, your arrows will actually get stuck in the enemy and you can see them whilst you continue your fight.

The whimsy doesn’t end with the visuals either, the music conjures up the idea of a digital renaissance fare and really adds a nice final touch to your fantasy adventure into the unknown. Another thing I loved is that the characters don’t really talk much, they grunt and make noises, but it’s not really speech. Perhaps there’s a single spoken word that I’ve missed, but overall there isn’t much speech, but I think the game is better for it. I think that the lack of speech from characters just further emphasises this idea that they are pawns that are just moving about on a table-top in front of you whilst you try to ignore your friend looming over their Dungeon Master screen in anticipation of you making a wrong move.

TIME FOR A HEALTH CHECK

The game isn’t perfectly flawless and I encountered a couple of small bugs, but let’s admit – that’s fairly standard for any game. The only real bug that got in the way of me playing was an irritating glitch where having a message box pop up would occasionally cause my screen to hang. You can’t close the message box, select anything else, or end that character’s turn. All you can do is open up the main menu and opt to quit back to the title screen so that you can reload your adventure once more.

VERDICT:
For The King is a delightful and genuinely enjoyable game. It’s all too easy to lose yourself in this adorable and quirky table-top world and spend hours on end in your adventures. Whilst it might not achieve a perfect roll while it still harbours a few bugs, they’re easy enough to overlook as the game is worth a few random reboots just to keep playing. It’s a great way to get a Dungeon & Dragons fix without having to find other people willing to join your group or take on the role of Dungeon Master. 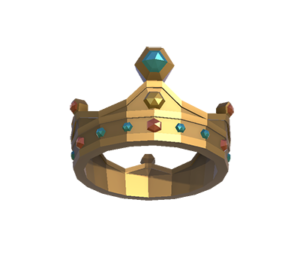 This review was originally posted to another website of mine, but I have transferred it over to keep it as the other site is closing down.

One Reply to “For The King”